We at Hike One are no strangers when it comes to testing and designing for Car UI’s. This is why we’ve teamed up once again with AutoWeek magazine to test and compare six new models from from different price categories and segments.

How to measure a good CAR UI?

We’ve tested all cars the same way as we did during our previous team-ups with Autoweek. We took the cars our for a drive and ran them through a few everyday occurring scenarios. These include for example setting up a navigation destination by hand or voice, checking if the way finding is clear while driving over there and at the end try to automatically park at the destination. Most modern cars have integrated driving assistance features to enhance safety and comfortability. That’s why we’ve also tested some scenarios that include using the line control or advanced cruise control.  Smartphone integration is also an unmissable feature in this day and age. To check if this all goes smoothly we’ve done tasks such as selecting a specific Spotify playlist from our library after texting a colleague back that we’re on our way.

The usability of all these features is important, but looks also play a big role in the whole experience. The UI’s have to be clear and easy to scan but also have to fit the brand and image of the cars themselves.

We’ve put all of the above criteria into an interactive checklist that we filled out during our tests on the road. This gave us an average of how well the car performs on these points.

The gist of this test was to see how well an inexpensive SUV such as the Dacia Duster would fare up to a high-end luxury sedan like the Audi A8 L in daily tasks.

Here is the full line up of tested vehicles, from low to high-end: 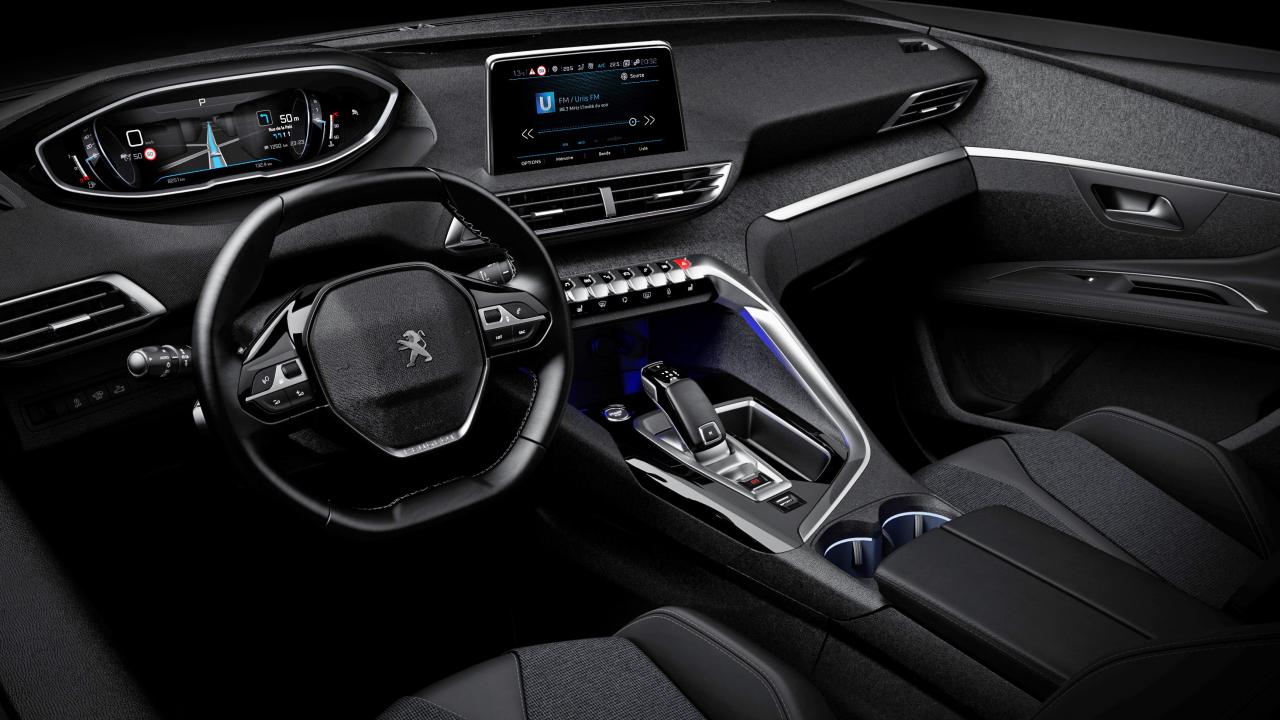 The winner of the bunch was clearly the Peugeot 3008. The interface is clear, has great contrast and has no unnecessary bells and whistles. The displays are easy viewable while driving since they are pointing toward the drivers seat, a small touch that makes interacting just a bit easier.

Navigating through the menu’s isn’t the fastest experience ever, since it stutters a bit from time to time, but the interface has a good layout with clear patterns The dashboard even features easy to reach hardware shortcut buttons to quickly jump most features of the system.

Styling of the interface is great, the sharp corners of the interior flow through to the on screen elements. It also has lots of customisation options for the instrument cluster screen. While it gives the user lot’s of options to tweak around it still always provides a good view of the most vital information while you’re on the road.

While driving the turn by turn direction are easily glanceable in the the instrument cluster. We also like the option to search for POI’s (points of interest) instead of exact addresses. Something not all cars featured. Smartphone connectivity is also great, next to CarPlay and Android Auto integration it is also possible to mirror you whole Android phone screen by using Mirrorlink.

Changing the temperature is fully done by touchscreen controls. While this works fine, it’s still more of a guess that also giving users tactile buttons. It is surprising Peugeot didn’t add those since there are plenty of other hardware buttons to navigate through the interface.

Lane and park assist are fine, but not as refined as the Mercedes that we’ve tested. For example, the parking assist has some trouble detecting a free parking spot. In the end this was so annoying that it’s faster to do the parking yourself.

In conclusion, the 3008 puts focus on what matters while on the road and doesn’t want to impress you with unnecessary styling elements or half baked features. 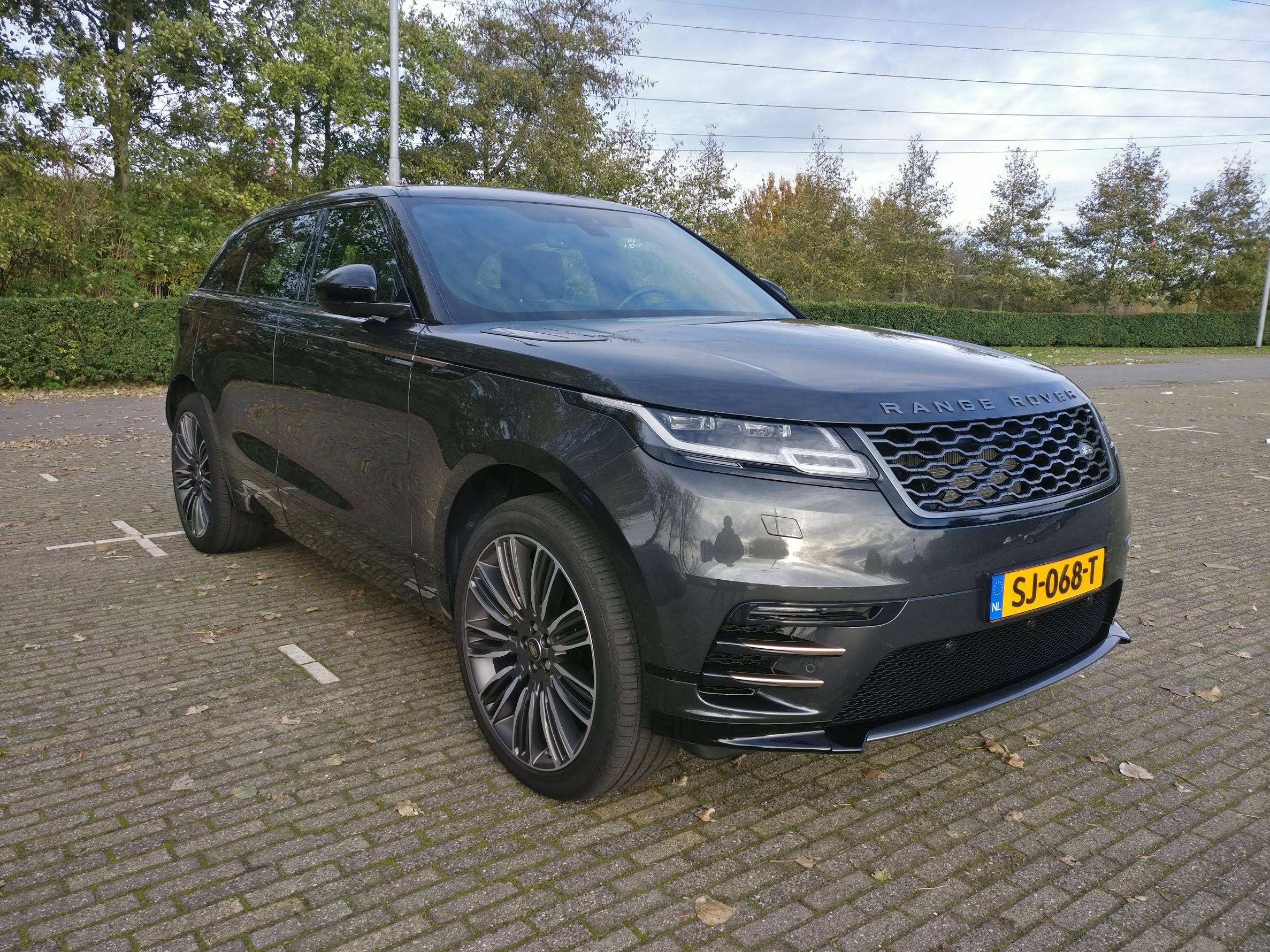 Futuristic looks, tilting displays and physical buttons that seamlessly melt into the bottom screen. Sounds good right? While this kit sure looks impressive, using it is a chore.

At the first touch, you immediately notice there is quite the gap between the glass and the actual screen. This results in having to press quite hard on the display to navigate through menu’s. And that’s not a good thing while you’re in traffic. It feels like touching an old CRT-monitor mounted in your car. The screens as well as the physical buttons give no feedback when you interact with them which make you question if you’d actually clicked anything when not paying absolute attention to the interface. We do actually like the two physical knobs built in the lower display which makes changing climate options a breeze while driving.

Navigating through the interface of the Velar is a slow and sloppy experience. The menu structure is most of the time really unclear and there are way to many steps to change most of the settings. There also is no clear pattern on what will be displayed on which display. Clicking something on the main display will for example open up something on the lower display. It always feels like a guess where it’s going to appear. 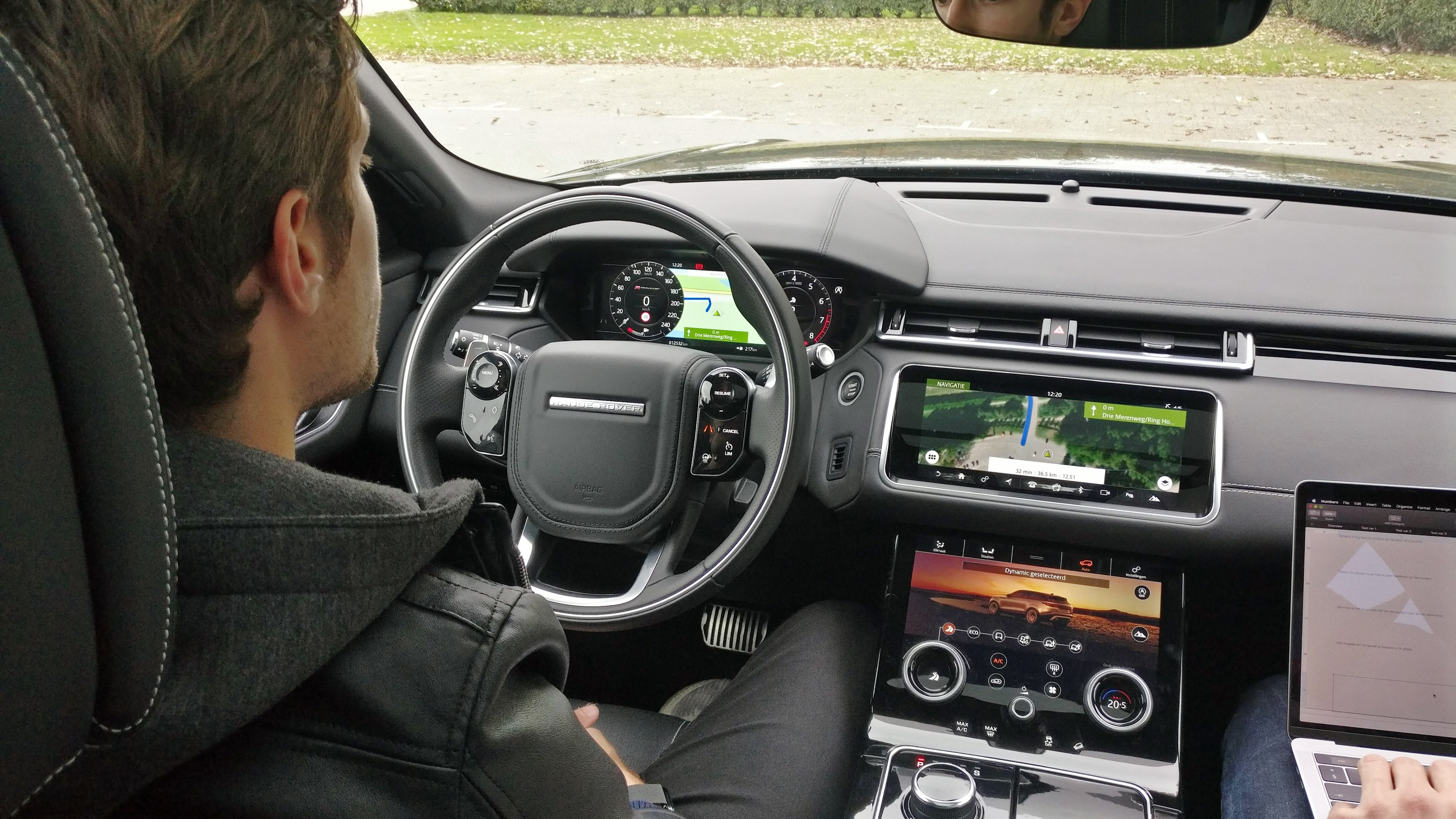 The styling of the interface does actually really give you the Range Rover vibe, maybe a bit too much. Most of the interface is build up by stock photos or using “cheesy” promo shots from the Velar. It almost feels like they are still trying to sell this car while using it. One pro of the interface is the possibility to customise the homescreens to you own liking, almost like an Android smartphone.

Talking about smartphones, the integration of them in the Velar is next to none. There is no CarPlay or Android auto available, just Bluetooth connectivity. We unfortunately also had trouble with this, both our iPhones and Android devices refused to connect to the system.

While driving, controlling instrument panel display is done by controls on the steering wheel. The wheel has two circular directional pads that also are touch sensitive. They work kinda like an iPod clickwheel, except they don’t give you any feedback at all while using them. It just feels like one big mushy button.

The Velar ain’t cheap, and seriously lacks some driving assistance features for the price. It only has lane keeping assistance which was remarkably slower than the other cars we’ve tested to give you a warning when crossing the line. It also has no automatic parking, just a backup camera (that funnily enough gets cut off by the license plate) and parking sensors.

In conclusion it’s safe to say that the Velar wasn’t our favourite. The hardware looks great but the software and all around usability is just sub par. 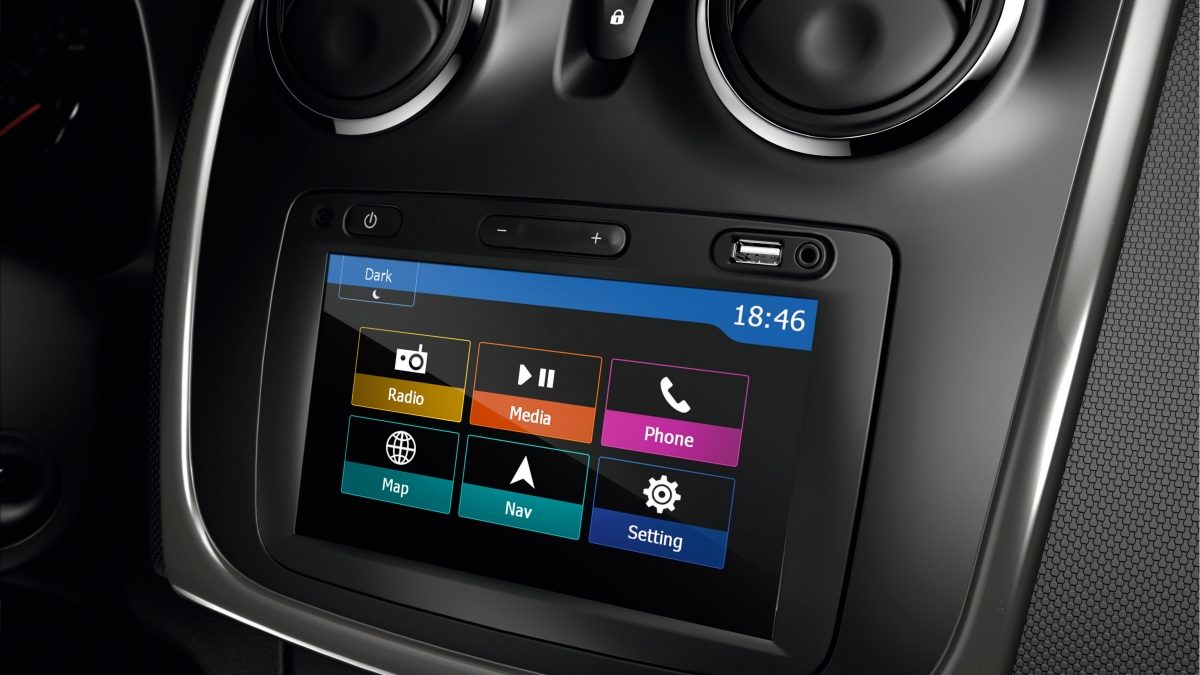 We just quickly have to mention our biggest surprise, the ultra cheap Duster from Dacia. This car shines in it’s simplicity and lack of features. It doesn’t have any fancy automatic parking functions or voice assistants, but what he does have, works flawless and quick.

The Dacia has just one resistive touchscreen with an interface that reminds us of a home computer from the 80’s. While looks aren’t great, the usability is. The menu structure is the same throughout the whole interface which enables you to control it without paying too much attention. The interface is quick and searching through the (offline) map was way faster than all other cars we’ve tested. 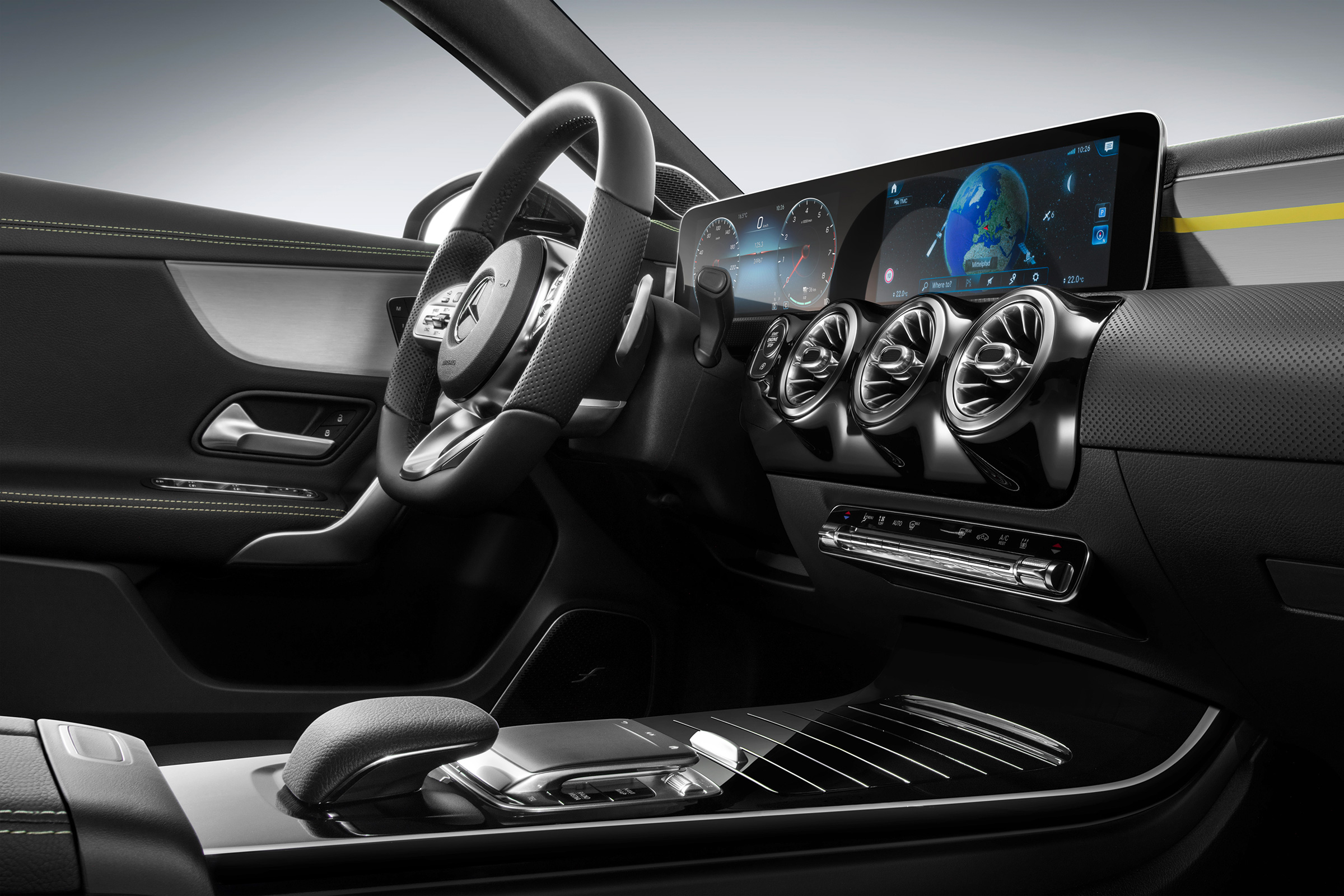 How does a cheaper car stack up in UX?

From our tests we’ve noticed that even the most expansive car manufacturers don’t get their interface right.  While the displays and interface styling of the Mercedes might look impressive, it is still less enjoyable to use in daily use when compared to something like the cheaper Peugeot. The shiny interface elements and gesture controls might look good but are way more distracting on the road compared to the more minimalistic and physical approach of most cheaper cars.

If you want to check out the full, more in depth review you can read the AutoWeek article in Dutch here.

We have more to read

The Power of Prototyping Meetup

The right tool for the job: Prototyping (Part 2)