Installing a new OS for our company: Part 4: Seven ideas to learn and improve.

Other articles in this serie: part 1 about training our people, part 2 on where to start, and part 3 about the dip.

Get better and better at Holacracy. Seven suggestions to up your game.

It is now two years since we changed the way we organise ourselves. We decided to do everything differently overnight and started to follow the rules of the Holacracy constitution. Two years later, we are still learning. Some things are great, while others are still very challenging. We executed several experiments to train the team, share knowledge and onboard colleagues to embed this new way of working into our company. If you are at the beginning of such a journey, or even if you are just thinking about making the switch, you will find inspiration in this post. Our coach guiding us through the meeting format

Months before making the shift, three of our people attended the 5-day official practitioner training for a full week. I believe it is essential that at least some people in the team are formally trained in the practice. A year later, we bought three more tickets. Now 10% of our colleagues are officially trained. People who attended the training are very knowledgeable and motivated to support others. But keep in mind, these people also have to do their work. They don't have time to train the whole organisation with the implementation. Also, understanding the game is one thing: implementing is something else. Therefore we decided to also invest in a certified coach to help us the first half-year. Now, two years later, we still make use of experts on specific topics like our salary model and giving feedback. Of course, you can figure these cases out yourself (see reading suggestions) but getting an expert to help you saved us a lot of time and mistakes.

Directly at the start, a circle around Holacracy was proposed. In the beginning, there is a lot of work that requires several roles. I'll give you a brief explanation of what our Holacracy circle entails and what roles we found useful. Of course, every organisation will form its own structure, so read this as inspiration.

The purpose of this circle:

"Using principles of self-management and GTD to improve Hike One continuously."

At first, the purpose focussed on just Holacracy. Then it evolved and also included projects around GTD (Getting Things Done), feedback, OKR's (Objectives and Key Results) and other models that you can use on top of Holacracy. We found out that most of this work started as an idea in the Holacracy circle, but soon transferred to other circles. Feedback went to HR and OKR's to the company circle. GTD stayed in the Holacracy Circle. In a way, this circle acts as an incubator for supporting structures and methods to our self-management model, which deploy to other circles.

Later on, we also changed the purpose of the circle to state self-management instead of Holacracy. We found that focusing too much on the method turned in a goal of itself, rather than a means to an end (the end here being successful self-management).

In Holacracy roles come and go. So I'll share the roles that appeared in the circle and what was the tension that created them. 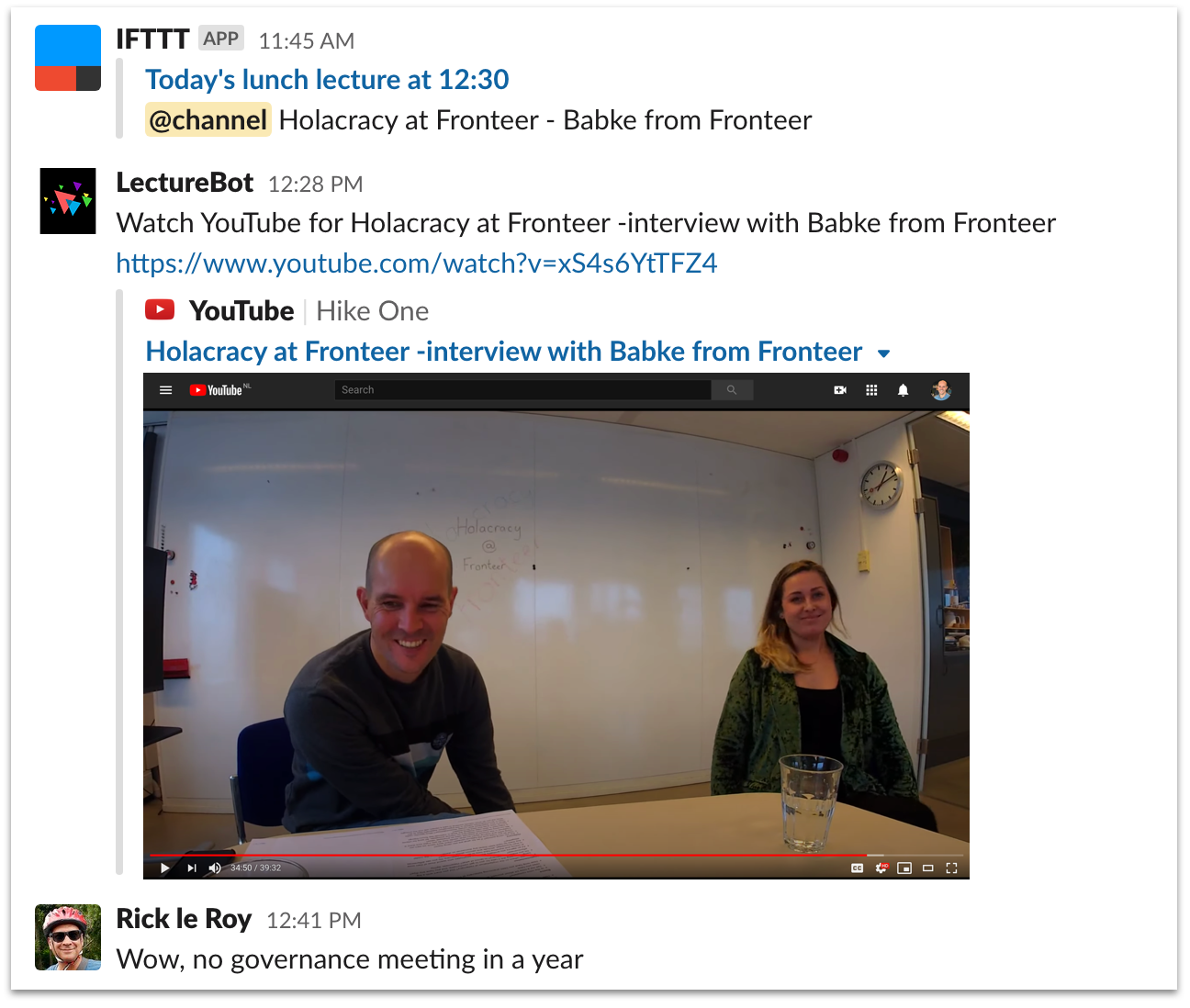 Combining our lunch lecture setup with the habits.

3. Interview experienced practitioners from other companies

Because Holacracy is so different from traditional organisational models, it is hard to get understanding from people who haven't experienced this way of working. This can be challenging at times, as there are limited examples that we can learn from. Why are we doing this? Why do we have to figure all this stuff out? We came up with the idea to invite people from other companies that were already further in their journey and interview them in front of our team.

Before each interview, our colleagues received background information on the person and the organisation. We created a form that people could use to suggest questions for the interview.

Interviews are great because it doesn't take a lot of time to prepare. It is a fun way of sharing information and creates an excellent discussion. It is great to hear from other practitioners what Holacracy looks like further up the road. Among many other things, we learned that Governance meetings in the future would be faster and less cumbersome. Very good to know when you are just starting.

Like this idea too? We now have colleagues who are happy to be interviewed and share the Hike One journey with your company. Let us know!

I need to give the two definitions of this title before we dive in.

We combined the two to make the best out of it! This way, we used our existing framework of lunch lectures to help people learn the holacracy habits. We grabbed one habit category with a few lessons and transformed the content into an interactive break. We had some lively sessions complete with role-playing, quizzes and a lot of laughs. Every lecture used examples from real situations we all know in our company. We recorded every habit, and these are available for our colleagues to watch at any time.

We get excellent feedback on these lectures. I think this way of talking about habits is more engaging than passively reading it from a screen. Also, the discussions we have about the topics are very insightful. 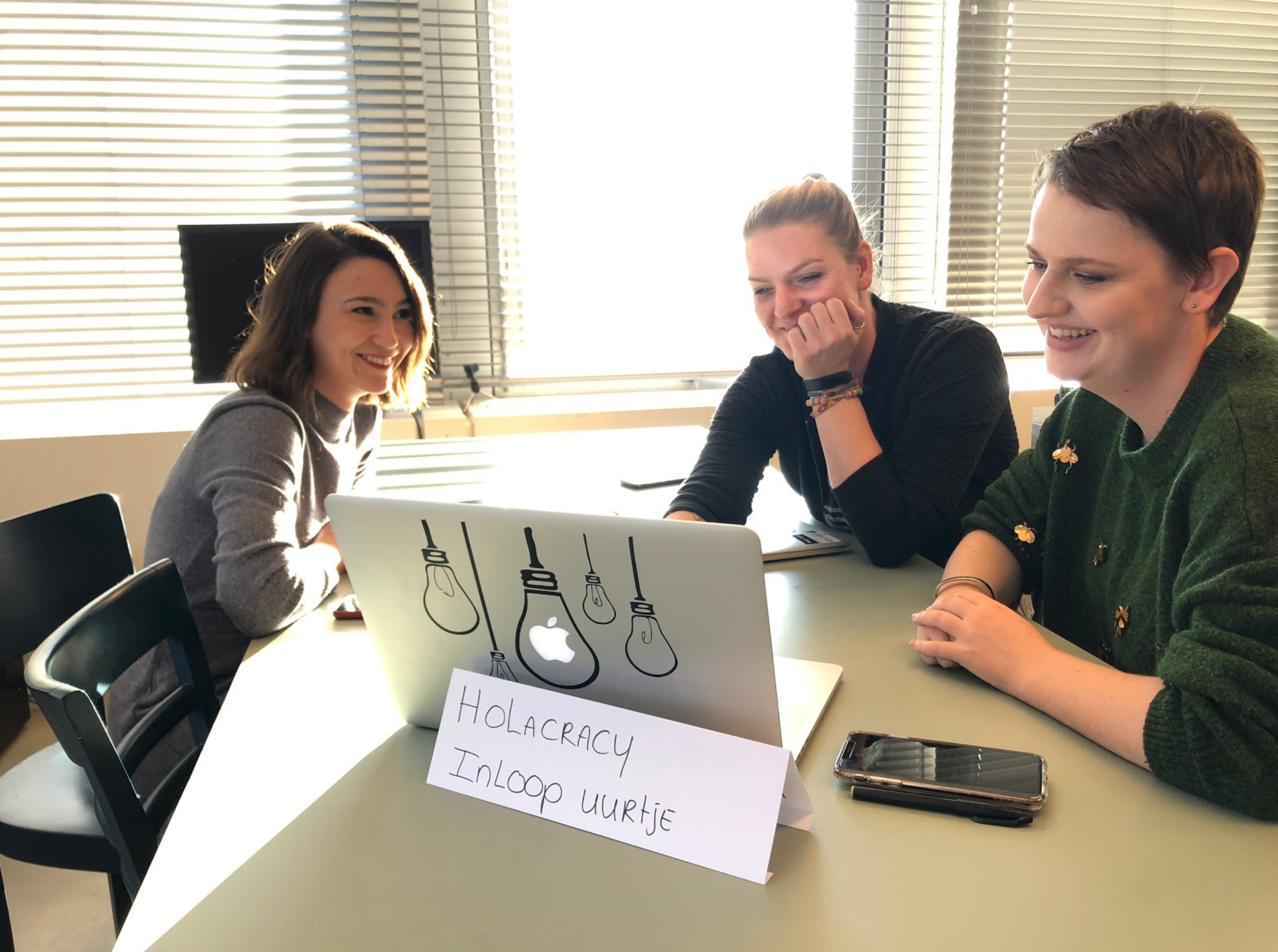 In our Amsterdam and Rotterdam offices, you might find somebody sitting at a table with a sign that says "Holacracy Inloopspreekuur". This means you can go to this person and ask any holacracy related question. This is a low threshold, informal way to get help. Many items are about processing tensions. We also invented a digital alternative to the consultation hour, called the Tension Pathway Finder.

Combining our lunch lecture setup with the habits.

There are several ways to help people process their tensions. We created something called a Tension Pathway Finder. This Google Form is pinned to the Holacracy Slack channel. It directs the person with a question around a tension to one of three resources with further information.

Currently, the Hike One Academy organises three types of training. The general Holacracy training, Lead Link training and Facilitator training. Each is based on the initial training sessions with our coach Organization Builders. We adjusted the slides to include examples and situations relevant to Hike One.

New hires typically get the general holacracy training in their first few months. This 3-hour training we take an in-depth theoretical look at Holacracy. We start with the authority shift that Holacracy introduces. The most significant part of the program covers the Governance side: from the basic building blocks (Roles, Circles) to more complex elements (Domains, Policies). The final part discusses Tactical: here, we look at what the organisation expects you to regard normal (= doing) work.

We love to hear your thoughts after reading this post. Also, don't hesitate to contact us for more information or sharing experiences. Subscribe to our newsletter 👇🏽 to get notified for part 5 of this series!

On a mission to further modernise the company.

Your first Design Sprint: do these 3 things first

A new OS for our company: Part 1