Installing a new OS for our company: Part 3: Climbing out of the dip

This is the 3rd post from a series about our company adopting Holacracy. If you'd like to catch up, you can first read part 1 and part 2.

It's been a while since you heard from me. Sorry about that. We experienced a jumpstart last June when our organisation switched to Holacracy. September arrived and things got a bit tougher. I was having a hard time. There were a few factors involved, but Holacracy was definitely one of them. As I've written earlier, Holacracy is a fundamentally different way of organising. It's why it is compared to changing your Operating System. People need to change their mindset and adapt their behaviour. It's not for every organisation, and not for everyone. But for us, Hike One, it is a perfect match. At least, that was my conviction.

So today I'll talk about our transition. How we were expecting it to be a smooth ride. Then, I'll share 4 things I learned about our implementation of Holacracy. 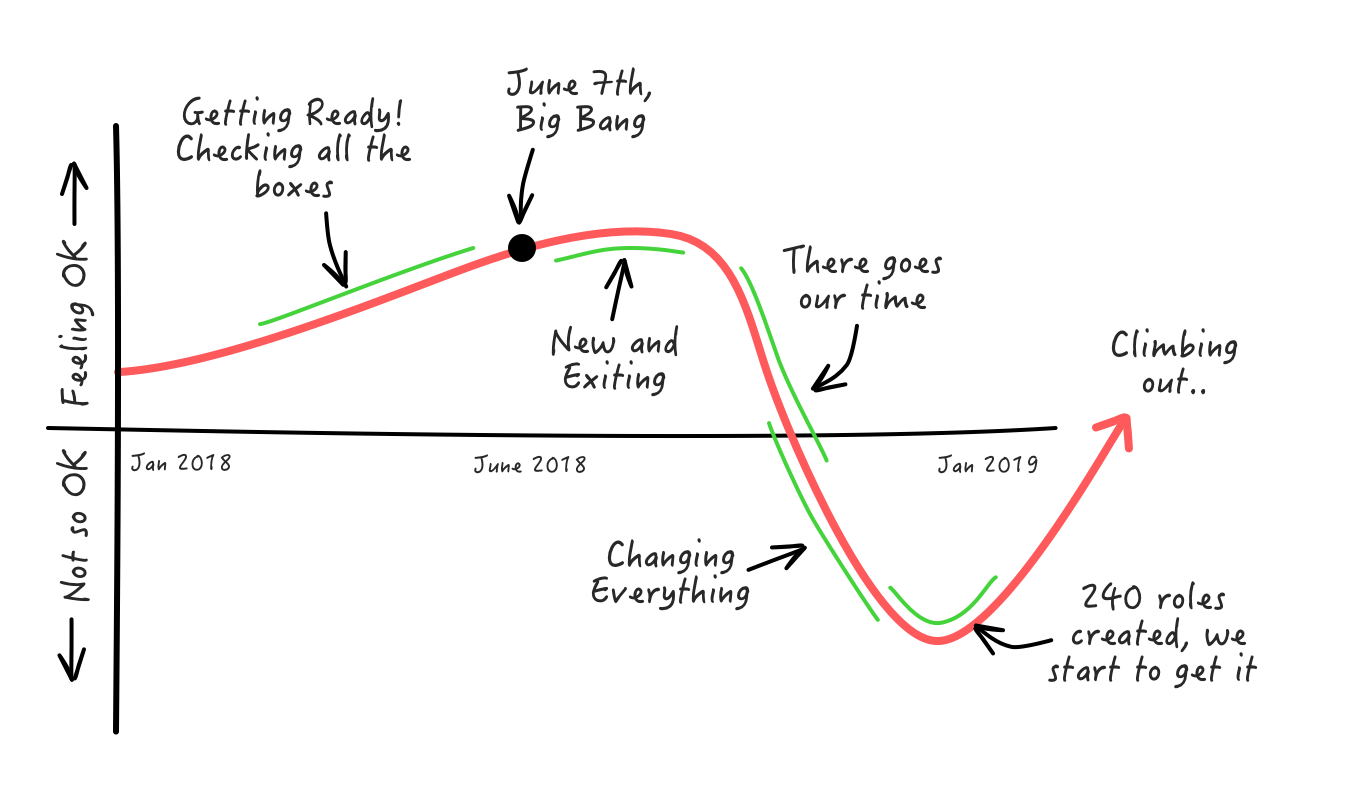 The ride - our journey - visualised (Not a scientific graph)

We ticked all the boxes

If you read about implementing Holacracy or talk to experienced practitioners, you'll learn what conditions should be met before your organisation begins with Holacracy. Things like:

☑️ Top management should support Holacracy and ratify its constitution.

☑️ You should do the transition with an experienced Holacracy coach.

☑️ A big plus: Have a team in place that can handle processes and change.

I think we checked all the above boxes.

We had management support

Rick, our co-founder, and I especially, were quite eager to adopt a new way of organising. As you might have read in the previous post, I did quite some research on the topic and was fully convinced that this was the new way of working. Holacracy would make the company more agile and transparent. It would promote ownership and entrepreneurship.

Then, the Big Bang implementation

Although we did carry out a brief dry run with a small Hike One team, our academy, we really began with Holacracy June 7th 2018. We invited the whole team to our Amsterdam HQ, had a great afternoon playing Lego while learning the very basics of Holacracy. After that, we asked the team if they thought it was safe enough to try. Yep. We signed the constitution and from that moment on, it was Holacracy.

We hired an external coach

We hired an experienced coach to support us through our journey. Together, we navigated through that momentous afternoon and planned the upcoming Tactical and Governance –Holacracy's two formats– meetings. We also organised many internal trainings for all our people and made a well-structured 6-month plan.

We love processes and… change!

We’re a creative bunch. We love to experiment and learn from it. We're very fond of working with methods like Scrum and running design sprints; methods with well-defined roles, rules, processes and meeting formats. We also love great software to organise things. For example, this post was written in Dropbox Paper, discussed in Slack and published with Buffer. So imagine our faces at finding out our new OS came with an app! Holacracy is a carefully thought-out method that doesn't stop at project level. It encompasses the whole organisation. That's why we wanted it! 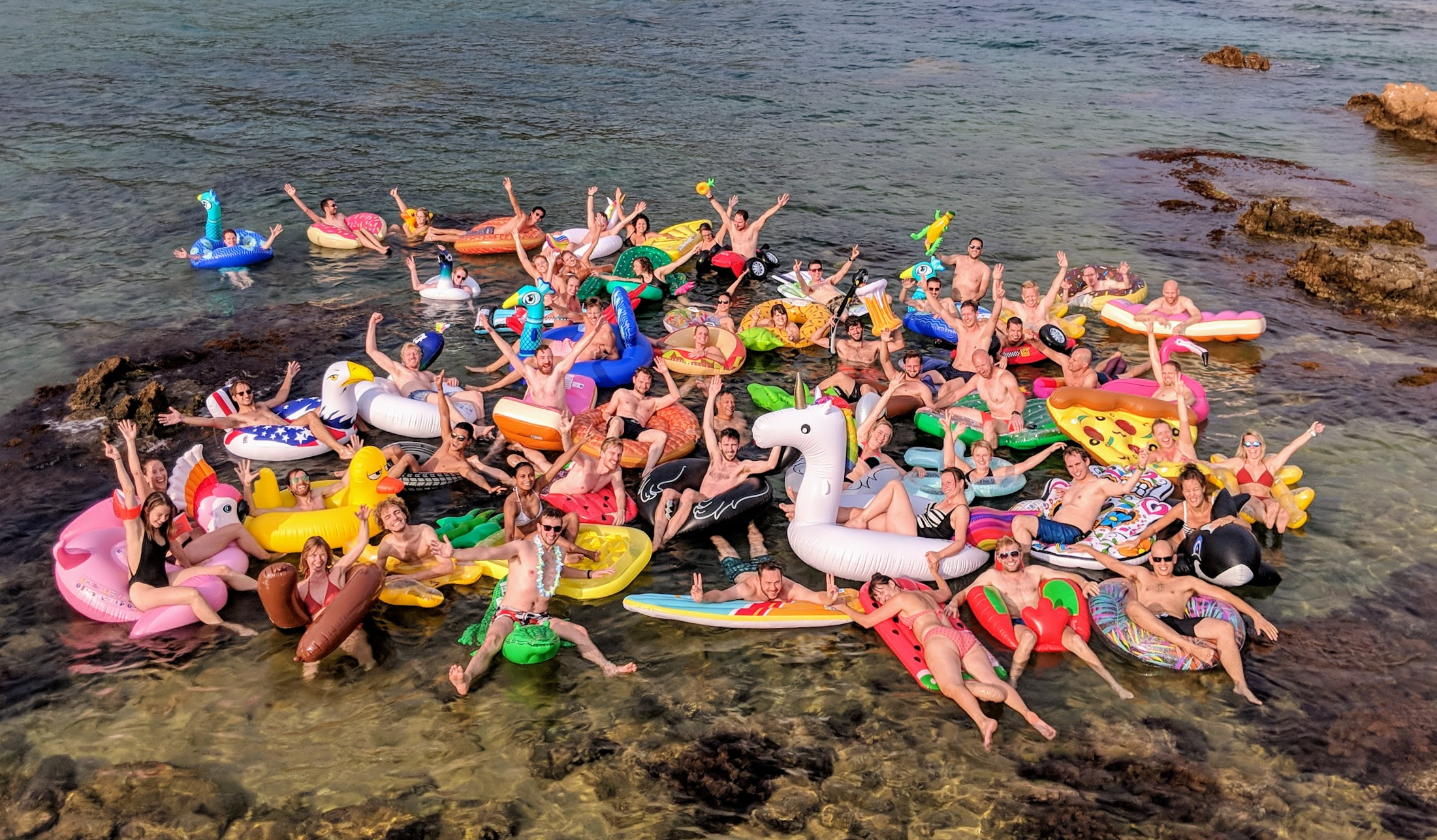 Don't you think this awesome team can handle some change?

The 4 things I learned

So we had checked all the boxes, and then things came to light.

1. Implementation is a time sucker

Picture a 10-year old company with 70 people. There are function descriptions, an org chart and processes. Now forget about that. The new task is to rebuild your organisation model using circles and roles.

So we started, as advised, with making a few circles that resembled our previous departments. But as we were getting down to details, things got a bit more complicated. As a note, Holacracy is strict when it comes to making adjustments to circles and roles. Modifications can only occur during a Governance meeting. And this meeting isn't your average. It takes time to get used to. It has a predefined format and each agenda item follows an Integrative Decision-Making process (let's save this one for another post). So, in the beginning things were very slow. One hour to make 3 to 5 adjustments, was the pace.

We had to restructure circles several times. After 6 months, we ended up with more than 25 circles and 240 roles. This demanded a lot of time from many people. It was frustrating. We held many discussions wondering if it was all worth it. We were using up a lot of work hours on structures and processes instead of doing real work. A time cap on time spent on “Holacracy”, was starting to sound really good. 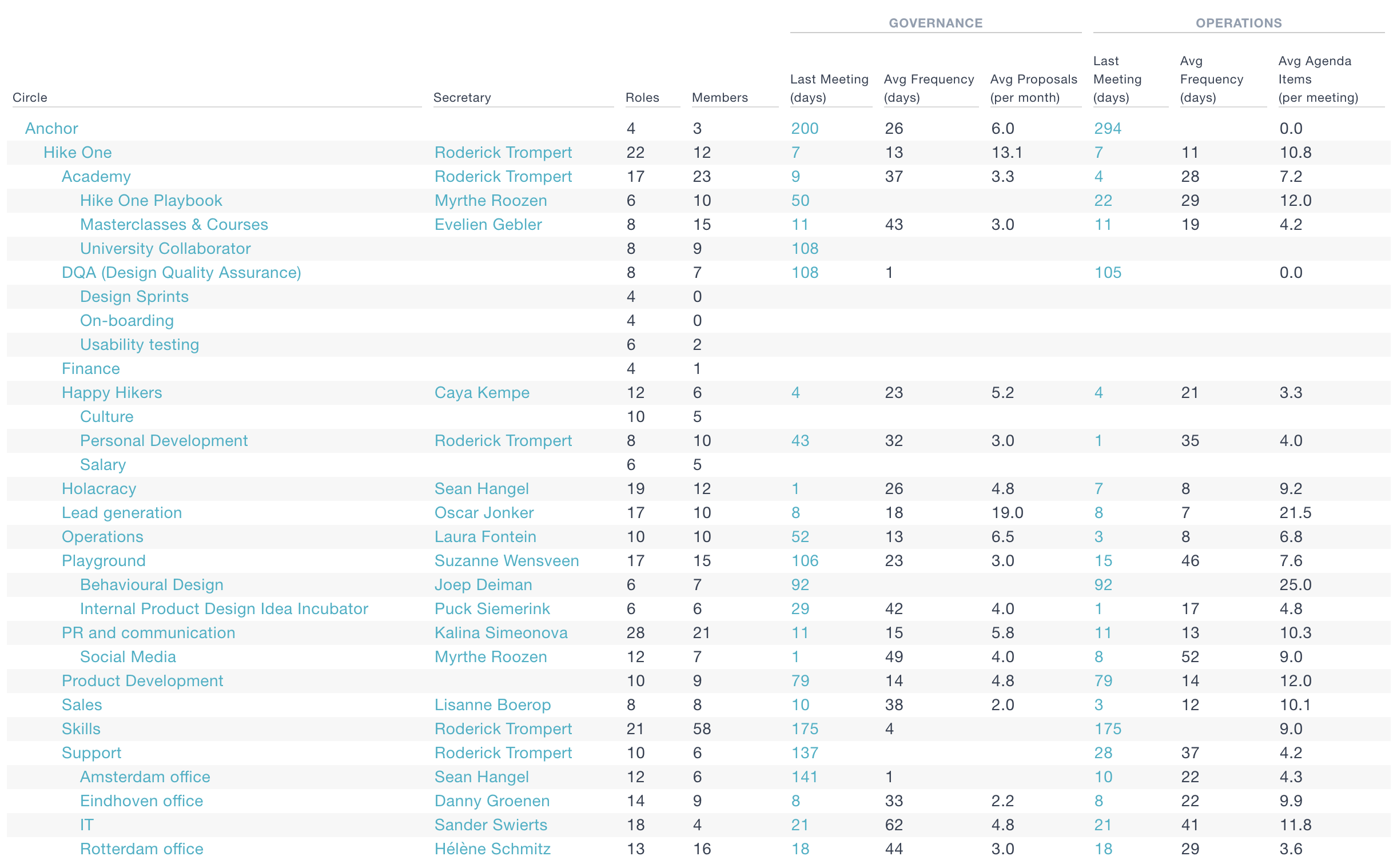 Within 6 months we created 25 circles and 240 roles

7 months later, things are going much faster. We have great facilitators to get us through meetings quickly. We are used to the meeting format, and can prepare a proposal effectively. Most Governance meetings I attend have only 1 or 2 agenda items, addressed in minutes. And we're done.

The same is true for Tactical meetings. Unlike the Governance meetings, Tactical meetings are focused on the operational work of the circle. At first, we planned in 1,5 hrs Tacticals. Now, they rarely last longer than 45 minutes while covering 25+ agenda items.

2. Beware. This is an open invitation to change everything

One of the key concepts of Holacracy is that power and decision-making authority are distributed throughout the organisation. There's no more command and control from top management –not that this happened a lot in our organisation, but we had unwritten or implicit rules– and decisions are made without being called back by managers. With Holacracy, everything is explicit. You determine roles and what their exact assigned accountabilities are. And everybody has explicit authority to change things. This combination leads to a lot of changes, everywhere in the company.

In 2017, we refreshed our brand and opened our Eindhoven office. 2018 saw one big change: implementing Holacracy. This transformation triggered many other changes. It came with rethinking our strategy, upgrading our salary model, budgeting, time management, financial reporting, quality assurance, onboarding, expense declarations, coaching, appraisals, feedback and lots more. As with the previous learning moment, this also took some time. Many of us were not involved in the change process on a daily basis. People had a hard time keeping up, as many of us worked on projects, often on site. Many changes and little time.

If your organisation is thinking about practicing Holacracy, I suggest splitting changes into phases, and over a decent period. For example, let's not change our salary model in the first 6 months. Or let's park changes to our budgeting process until next year.

In the end, change will lead to better

2019. Many good things are happening. We, ourselves, are constantly improving our way of working and organising. Things are running better than before.

3. Be clear about the magnitude. This is not a test.

On that June 7th 2018, gathered with all Hikers in our Amsterdam office, we asked if anyone objected to switching to Holacracy. In retrospect, we had already started without knowing, by asking: “Is it safe enough to try?” It was an unanimous yes.

Later, this conversation about “try” circled back a lot. Is this an experiment? When do we decide if we go on with it? When do we call this a success? But when I said try, I really meant do. So my answer was: This is not a test. We signed the constitution and we are in 100%. There's no stopping. There's no going back.

Then I realised, I hadn't taken enough time to clarify the magnitude of this change to all my colleagues before asking them to take this leap with me. Especially for those who had been working with us for years. Designers who had earned their leading functions or those working hard to get there.

And as I said, Holacracy doesn't do fancy functions. With the new OS, one generally does the same work, with the matching salary. But there's the additional requirement to explore and re-discover one's position, earn respect and find new ways to get satisfaction from one's work. This was more demanding than I had anticipated. 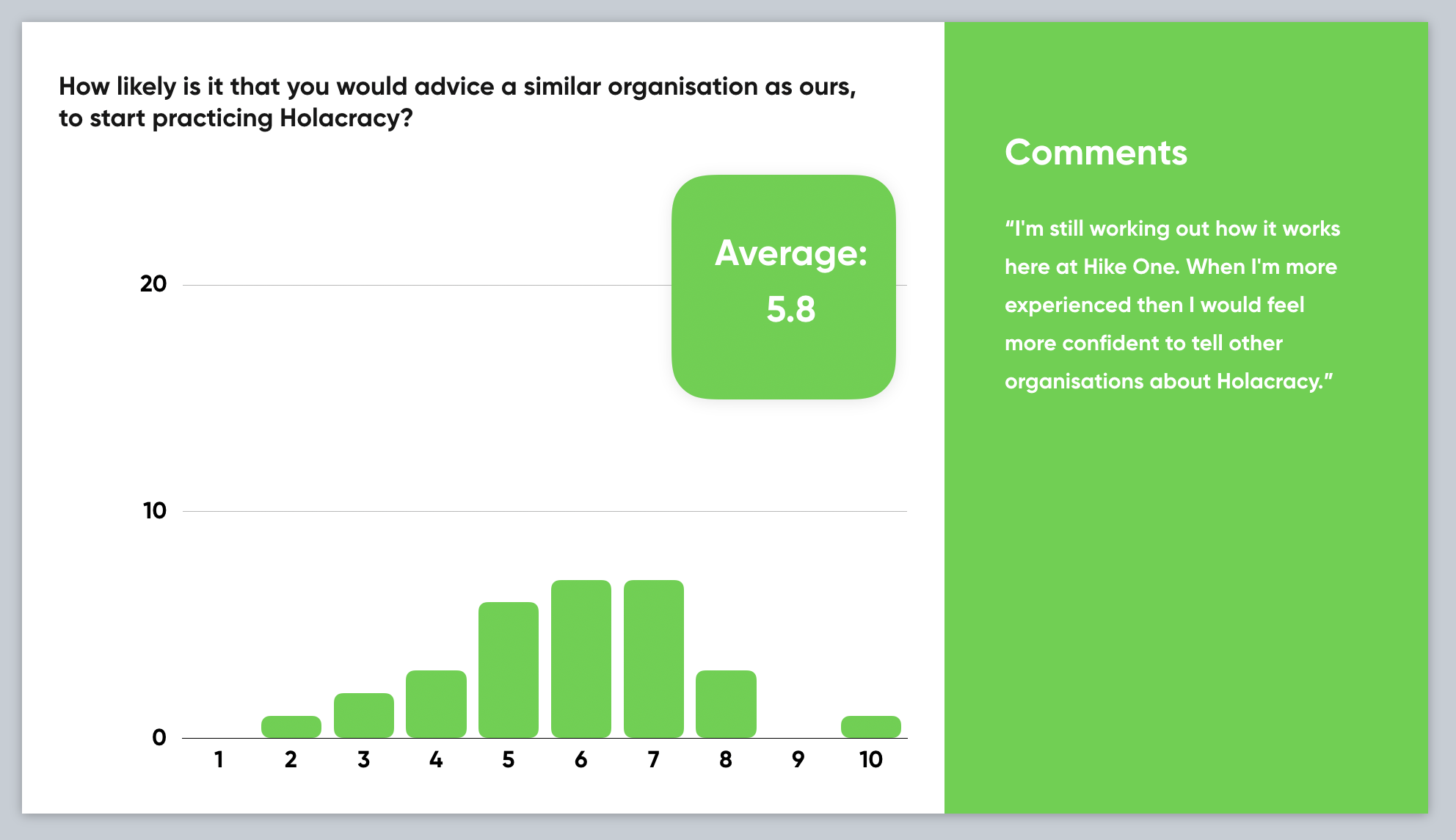 We evaluated Holacracy several times. I am confident the number goes up soon.

No one's given us flowery resignation letters pertaining to this change, so far. Admittedly, it crossed my mind more than once. Change and switching mindsets take time. Going from “I’m an employee with a function description” to “I’m a partner in this company, with aspirations, and have the freedom to take on multiple roles depending on what I like or think is interesting.” In the past months, I've seen many colleagues experience challenges in well-defined or in completely new roles. But we're getting there, and I'm seeing that we are performing well in this new system.

4. Holacracy is not a cure for everything

I knew this already, from my conversations with experienced Holacracy practitioners (as you can read in part 2). Someone said “Holacracy is the best way to organise your company, but it's still far from perfect.” Now, with some experience under my belt, I can confirm the truth in this statement. Holacracy does not solve everything. Not compensation, not sales process, budgeting, hiring, firing or personal development. We are all still humans, dealing with emotions and complex challenges.

Holacracy does provide a very transparent, well-defined operating system to make fast decisions, try them out and iterate. We're moving things forward. We're well on our way to free ourselves from endless discussions, unclear authorities and rigid processes. We're ready to evolve and become the company we aim to be.

Want to hear more? I am happy to talk about my experiences.

On a mission to further modernise the company.

Take it to the next level!

Curious to read more on this topic?

A new OS for our company: Part 1

A new OS for our company. Part 2

"Our Holacracy Journey" is now a talk!